Know your family history, does it include diabetes?

If so make sure you know your numbers. A blood sugar greater than 1oo when fasting  140 for someone two hours after eating is considered high. When you go to your health care professional for blood tests do you ask for a copy of the results, or do you simply get a call from the nurse saying it is normal? I recommend always getting a copy of your results. Over the years many are told there blood sugars are normal when in fact they are prediabetic. This should trigger either a conversation or a referral for education on how diet and exercise can help to avoid having full blown diabetes. Unfortunately this piece is often missing in many health care visits. Make sure you advocate for yourself. The infographic below is posted to help you advocate for yourself or your loved one.   Keep records of your lab reports track and trend them, are they improving or worsening. You know best how well you have adhered to a healthy diet, but the numbers give you concrete data.

Heart patients need to be more aware than most as several heart medication can pre-dispose one to diabetes.

Great fix the heart but then get diabetes! Yes, it is a real issue, but again through tracking, diet and exercise, medications hopefully we can prevent this from occurring.

There  is a strong link of heart disease  in people who  have high cholesterol and are diabetic.  Cardiovascular disease  is much more prevalent if their  Hemoglobin A1c is chronically elevated. This significant contribution by elevated HbA1c to increased CVD is independent of statin therapy (cholesterol lowering medications), and thus requires appropriate HbA1c management in addition to lipids reduction. It is vitally important that any individual with known heart disease and diabetes gets their hemoglobin A1c measured approximately 4 times per year by their primary health care provider. Once a year is not enough. Tight control is imperative. If the blood sugars are constantly running high the vessels that deliver blood to the heart are constantly inflamed setting the stage for further heart issues.

There are many hemoglobin A1c calculators can be found on the internet. Here is Medscapes version

Load up on nutritionally dense low caloric foods. Don’t let the day go by without eating vegetables. Challenge yourself with legumes and  beans which provides essential fiber in the diet. Drink water regularly. Avoid fast food and eating out as much as possible. Use fresh herbs and spices, yet avoid salt.

Learn your sodium intake,read food labels. Do the math. How much are you getting on a daily basis? 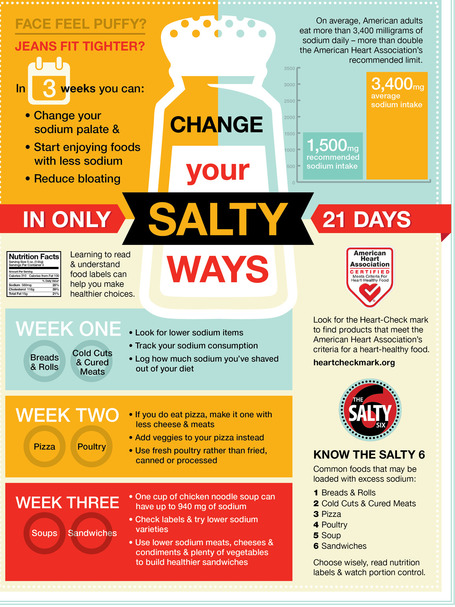 medwireNews: Restricting salt intake reverses vascular endothelial dysfunction in people with moderately increased blood pressure (BP), shows a randomized study published in the Journal of the American College of Cardiology. To read more on this go to link at the bottom of this page.

The job of the kidneys is to filter the excess sodium into the urine so that the body can get rid of it. Many with heart disease and diabetes kidneys cannot handle all the extra work. The kidneys become less efficient at filtering the blood stream. This causes excess sodium to enter the bloodstream. Sodium attracts water to it and effect known as being osmotic. Water follows the sodium  and is drawn into the bloodstream. Excessive salt keeps the circulatory volume higher than it should be, creating and increased pressure in the blood stream and pressing on the blood vessel walls. The stress of the pressure on the walls creates thickening and narrowing of the vessel, leaving less space for the fluid in the blood vessels and raising resistance.  The body then requires higher pressure to move blood to the organs. The heart has to pump against this high pressure system.

I equate it to trying to blow up one of those kids balloons that is turned into animal shapes. They are really tough to blow air into, your cheeks get really sore – this is the resistance of air, similar to the resistance pressure of blood in the arteries. If you stretch the balloon (relax the arteries) then there is less resistance in blowing up the balloon (filling the artery with blood). Twenty percent  of the blood pumped from the heart goes  first to the kidneys.  High blood pressure within the kidneys cause  damage to the heart and to the vascular system in the kidneys. Salt makes you thirsty so limit salty foods, especially if on a fluid restriction.

I once had a patient who lost 45 lbs simply from adhering to low sodium diet. He had a very weak heart with only 10% ejection fraction meaning very limited pumping ability. So a weak heart and sodium in the diet made him retain fluid more than most. He began to measure and count sodium with every meal for a few months and was shocked by how much sodium he consumed even though he thought he ate pretty healthy. By reading labels, doing the math every day and making changes such as eating out less, ordering special, reviewing his medication he lost the fluid and added years to his life, not to mention the improved quality of life with less shortness of breath and fatigue by easing the workload of the heart.

According to the American Heart Association, eating more than the recommended 1500 milligrams a day puts you at direct risk of high blood pressure. Yet in America we consume an average of 3400 milligrams a day; more than twice what we should. While people with hypertension, heart and kidney disease are always advised by doctors to eat less salt, the AHA wants all of us to do this, whether or not our blood pressure is currently in the normal range. 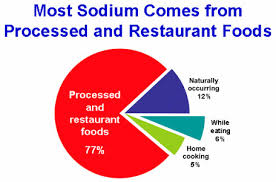 Exercising daily and eating a well balanced diet with the proper portion sizes are the best prevention for diabetes.

The relationship between diabetes and heart disease is striking. Many do not even know they have diabetes or are pre-diabetic. If you are overweight, or have a family history of diabetes it is important to work with your health care practitioner to watch your blood sugars control.  Many clients I have worked with through the years were able to get their pre-diabetic blood sugar values back to normal through diet and exercise. Many diabetics can reduce the medications for blood sugar control as well if they are able to adhere to the lifestyle choices of exercise and following a diabetic diet of good food choices and portion control.

Those that have diabetes need to be extra cautious to keep there blood sugars in the tightest control possible, as when the blood sugars are chronically elevated this sets the stage for dramatic increases in the prevalence of heart disease. Overeating sets the stage for insulin resistance. An analogy to help understand this is  filling a gas tank, you can only put so much gas in before it spills out. When we consume more calories than the body can use the body secretes more insulin and it circulates in the blood stream. The cells get adapted to the increased insulin this is called insulin resistance. This allows higher concentrations of blood sugar to circulate in the body. The higher blood sugars assault  the body, the eyes, heart, kidneys, nerves, arteries  throughout especially those to the legs and kidneys, setting the stage for not only heart problems but peripheral vascular problems, the most common reason for amputations. Exercise is critically important and should be adhered as it gets rid of the high concentrations of sugar circulating in the blood stream, and prevents them from doing more damage.

It becomes even more challenging too, as the most common symptom of heart problems – chest discomfort is less likely to be experienced by the diabetic patient, as the nerves that send the pain  signal to the brain do not relay the message. Thus symptoms are more likely to be shortness of breath, flu like symptoms, extreme fatigue, weakness in the diabetic patient. The hemoglobic A1c value is especially important to understand. The values are listed below.

The average American consumes 50 pounds of cookies a year and a lot of these will be consumed over the holidays.

How much added sugar is in a cookie? That all depends on the cookie of course but one little Oreo is 7 grams of added sugar. A homemade cookie can contain twice that.

So when you are craving cookies, how about clementines, grapes, pomegranate,  chestnuts, almonds dusted in chocolate powder, a cup of cinnamon tea, flavored coffee. If you do indulge try to keep in mind serving sizes. Follow it up with a walk or using some weights.