Working cardiac rehabilitation, one wants to take time off around Saint Patrick’s day and Easter. Often patients come in with weight up 10 lbs in one to three days, short of breath, swollen, and having elevated blood pressure. When asked, they report celebrating Saint Patrick’s day with sauerkraut and sausage, corned beef and cabbage, with lots of bread on the side, then celebrated Easter early with a ham dinner with gravy.

Caregivers take note, well-intentioned friends and family may have prepared meal or stocked freezers full of sodium laden foods thinking they are helping out during a  medical crisis. Be alert to sodium and it’s effect on heart health.  Programs such as  Meals on wheels also has a tendency to have very salty meals.

If you find weight up, swollen feet/ankles/belly/face, shortness of breath and elevated blood pressure consider the  dietary sources of sodium.

Sodium causes fluid retention, weight goes up,  and is often treated with increased diuretics (Lasix, Aldactone, Demedex, Bumex, Zaroxolyn etc.). The body can become resistant to diuretics however, so adding more and more diuretics can be dangerous. These throw off the electrolytes and disrupt the sodium potassium balance of the body, which can set in motion additional heart problems including arrhythmia’s – irregular heart beats that could be deadly. Other side effects of diuretics include: 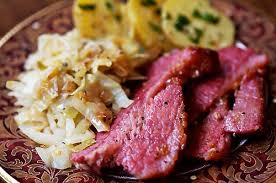 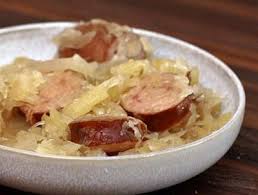 Bought raw or in a can, corned beef brisket is very salty. One 3 ounce serving of cured corned beef has 964 mg of sodium, 40 percent of your daily value of sodium. In addition to sodium, corned beef is generally made from the fattier brisket areas, so the fat and cholesterol levels tend to be on the high side when compared to some of the more commonly available beef cuts. 1 cup of Cooked Sauerkraut has about 900 mg of sodium. Ham isn’t better – 4 oz. of ham can have between 1000 and 3000 milligrams of sodium.

If your diet is going be high in sodium, eat more potassium-rich foods. Potassium helps to lessen the dangerous effects of sodium. Foods high in potassium include bananas, potatoes, squash, spinach, raisins, cantaloupe, beans and lentils.

Rinsing foods such as sauerkraut, or canned beans or veggies in a colander can remove up to 40%. Read labels and aim for foods with 300 milligrams or less of sodium per serving.

To learn more about salt and heart health click here

To learn more about how to lower sodium in diet click here.